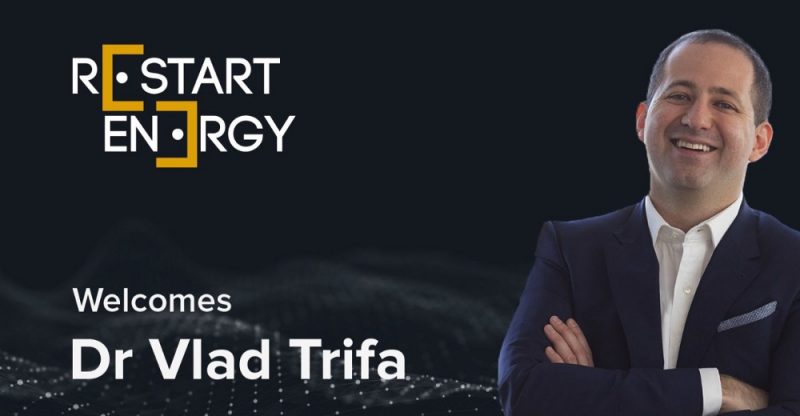 Restart Energy, a major European energy provider and creator of the world’s first market-ready, blockchain energy trading platform, has today announced the addition of a new member to its Board of Advisors, Dr Vlad Trifa. Trifa is a computer scientist, researcher, and entrepreneur who has played a key role in defining and implementing the application layer of the Internet of Things. His experience in all things IoT will prove invaluable when it comes to fine-tuning Restart Energy Democracy’s energy balancing system, which facilitates cross-border energy transactions.

Dr Trifa boasts an impressive resume, having co-founded and led product development and R&D departments at EVRYTHING, an award-winning, industry-grade IoT cloud platform used by numerous Fortune 100 companies. Until 2017, he launched and led Swisscom Digital Lab, a leading innovation centre in enterprise digitalisation for the largest swiss telecommunications provider, which helps companies harness the latest technologies such as A.I, Blockchain, and IoT — all of which are highly relevant to the RED ecosystem. His latest project is Ambrosus, a company focusing on end-to-end food traceability using Blockchain and IoT. There he acts as Chief Product Officer.

Trifa is a firm believer that IoT and other innovations can help energy markets move away from the existing model of monopoly players into a system that is far more decentralised, regional, and efficient.

“I’m very pleased to join the Restart Energy Democracy project as an advisor. I strongly believe in the vision to create a global and decentralised marketplace for energy, and have full trust in the team’s capacity to succeed with such an ambitious roadmap — their achievements to date speak for themselves.” explained Dr Trifa “After spending a decade in the Internet of Things market as an engineer and entrepreneur, I am convinced that the combination of IoT, Blockchain, A.I, and Big Data proposed by RED has the potential to entirely disrupt the existing old and inefficient energy market. I am honoured to have the opportunity to be a part of this exciting mission.”

Restart Energy is in the process of launching an ICO to support the creation of their blockchain energy trading platform known as Restart Energy Democracy, or RED for short. The ecosystem is a one of its kind and world first, in that it is the only blockchain solution designed to work with existing laws and regulations. Its core functionality is an improvement on the way energy is bought, sold, and consumed. By cutting out middlemen and allowing fully P2P transactions, costs are able to be reduced dramatically.

The platform will be based on the MWAT token, short for MegaWatt. Each token holder is awarded with real energy, taken from the platform’s transaction fees between providers and buyers. As the company increases the energy available to their markets of operation, so too increases the energy available to token holders. It is planned that within a few years there will be enough users of the ecosystem to allow a single MWAT token to power an entire house for a month. Energy that can be used to settle an invoice or sold for profit on the marketplace for ETH and local fiat.

RED (Restart Energy Democracy) is a blockchain powered platform backed by Restart Group, a European energy provider with $20 million in revenues. The company was built with a view to democratize the energy sector and quash the dominance of legacy monopolies in the energy world. The company’s credentials include 400% growth since 2016 and a customer base of 27,000 household and 3,000 corporate clients, expanding at more than 2,000 clients per month. Restart Energy is developing the world’s first peer-to-peer, fully decentralized energy transfer platform based on its proprietary virtual balancing system that uses A.I, Big Data, and IoT technologies.

The RED ecosystem is comprised of the RED-Platform, RED-Franchise and RED-MWAT Tokens. RED-MWAT are crypto tokens that enable virtual storage of electricity and will facilitate the development of clean affordable energy.